“As the food system becomes more digitized, safety and quality tools will be much better”

It was back in 2014, while preparing for a meeting of the Global Food Safety Partnership (GFSP) leadership group at the World Bank headquarters. I let some people in my network know that I would be in Washington, D.C. And a very interesting invitation arrived in my mailbox.

A few weeks later, there I was at the beautiful Whitten building of the US Department of Agriculture (USDA). My meeting was with one of the most interesting – and important- people in that building: Dr. Cathy Woteki, Under Secretary for the USDA’s Research, Education, and Economics (REE) mission area, as well as the Department’s Chief Scientist.

At that time, Dr. Woteki was supervising the implementation of the Open Data Policy that the Obama administration put in place for all USDA agencies and programs. She was also among the leaders actively supporting the vision of the Global Open Data for Agriculture and Nutrition (GODAN), mobilizing resources and people that helped this network reach more than 1,000 members.

I left Whitten feeling inspired and motivated. As I wrote afterwards, I was impressed by how much warm, knowledgeable and open minded she was. Very eager to talk about the open data work that USDA was doing, but also really looking forward to find out more about Agroknow and our contribution to networks like GODAN and the GFSP. I think that she was also one of the first people that heard me describing the concept behind FOODAKAI, a few months before we actually launched it.

The conversation starter has been the emergence of data sharing as a popular topic among food supply chain stakeholders. Food industry groups, such as the Food Industry Intelligence Network (FIIN), promote the concept of trusted environments within which data sharing benefits of all participants. Governmental agencies such as the FDA in its Strategic Blueprint highlight the importance of data interoperability and sharing to ensure that consumers have access to safer, healthier food.

I really wanted to know how this looks like to an open data visionary that has served in leadership positions in government, industry and academia. I wondered if she still finds open data sharing relevant in today’s context, both as far as the public and the private sector are concerned.

I therefore reached out to her. And her response has been insightful and delightful.

Many people believe that COVID-19 accelerates the digital transformation of the food system. Does it also affect the way that research is taking place? How will a more digital future for agricultural, food and nutrition sciences look like?

You’re right, there’s accumulating evidence that the pandemic has accelerated pre-existing trends throughout the food system toward greater reliance on digital systems, artificial intelligence and robotics. Laboratory and field research in the food and nutrition sciences are included.  Agencies that fund research are making digital agriculture a priority.

For example, in late August the National Institute of Food and Agriculture and the National Science Foundation announced that they had established a new nationwide network of seven artificial intelligence research institutes and two will be dedicated to food and agriculture.

The first Institute, located at UC Davis, will focus on next generation food systems and use AI and bioinformatics to explore biological data and processes; molecular breeding to optimize crop yield, quality and pest/disease resistance; and all aspects of food production, processing, distribution, and nutrition.

The second institute, headed by University of Illinois scientists, will have agricultural resilience, management and sustainability as its focus and will concentrate on computer vision, machine learning, soft object manipulation and intuitive human-robot interaction to solve agricultural problems like labor shortages, efficiency and welfare in animal agriculture and environmental resilience of crops.

For the future, I expect that scientists working in agriculture, food and nutrition will embrace the principles and tools of open science. These include research software that helps teams to manage and share their work more openly, registries where research protocols are posted to inform the public and to receive critique, and online scholarly journals and data repositories where the results are accessible to all.

Almost ten years ago, you were one of the open data and open science advocates and visionaries. Are open policies and data sharing still relevant today? Do you see any impact from policies that you have helped shape and establish?

Without question, open data policies and data sharing are very relevant today.  Since leaving government, I’ve been on the board of Open Data Charter, an organization that advocates that governments at all levels adopt open data policies and provides guidance on how to do that.  There’s an international community that is very active in demonstrating how open data contributes to reducing corruption in government, provides benefits to the community, and stimulates research and entrepreneurial business opportunities.

Some of the policy issues that are currently under discussion about open data policies are how to assure personal identifiers and information remain private when countries do not have a history of strong legal protections and how to achieve “open by default” when it requires resources to prepare and post data whether it’s research data or administrative data.  Attention is now being focused on countries taking steps toward open data policies by first identifying important data sets to address societal issues and purposefully making them open and accessible.

In the US, the open data policy adopted while I worked at USDA provided hundreds of data sets that have been used for research and business applications and we also worked with G-20 countries to encourage them to adopt open data policies for agriculture and nutrition.  With the UK, we helped launch Global Open Data for Agriculture and Nutrition that now has a network of over 1,000 partner organizations that share the commitment to make agricultural and nutritional data available, accessible, usable and unrestricted.

And for the US scientific community, one of the biggest impacts has been the requirement that publications and the underlying data that come from research funded by the US government be available free of charge. 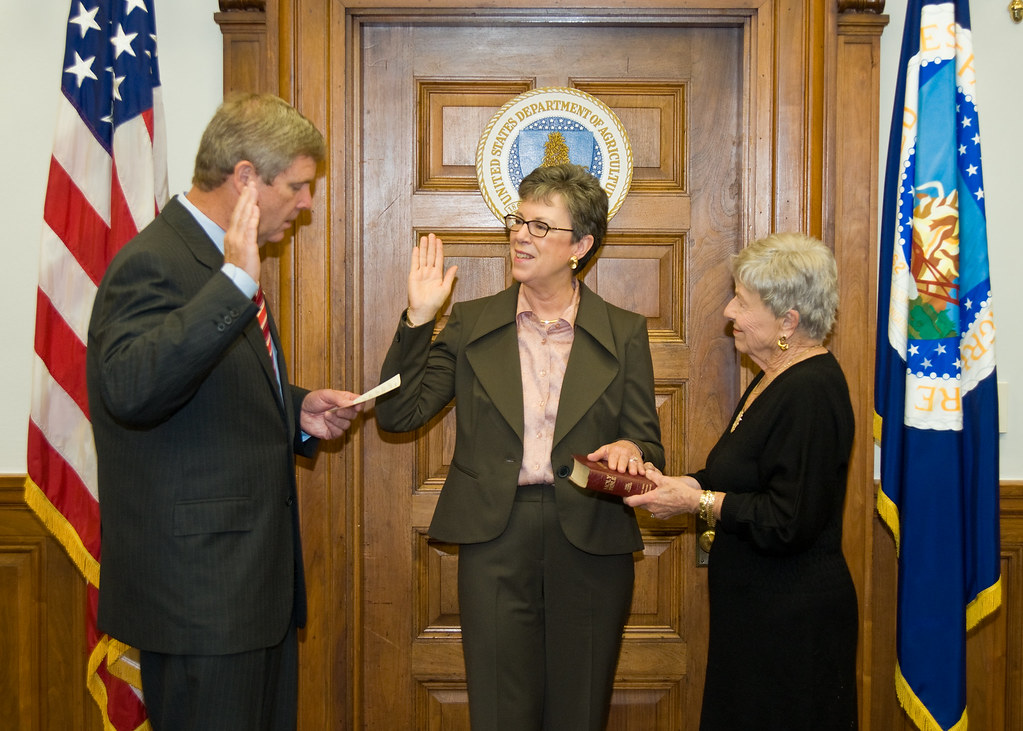 You have served as the first under secretary for food safety at USDA. Nowadays, the US Government is taking a new approach to food safety, leveraging technology and other tools to create a safer and more digital, traceable food system. In your opinion, what is the most important achievement that such an approach should try to make?

I come out of the public health community, so reducing the incidence of food borne disease is the most important achievement I hope to see from application of new technologies to the food system.  When I was under secretary for food safety, we implemented a new approach to food inspection that was originally developed by NASA to assure that the food astronauts took to space would not make them sick.  Today, a wide array of technologies from blockchain to whole genome sequencing are being applied across the food production and regulatory systems to make food safer.

You have also served as a senior executive at a large food manufacturer. Is there a piece of advice that you could offer to fellow scientists that hold high level positions in the food industry? How can they survive and thrive in this rapidly changing environment and a food supply chain that becomes more and more digitized?

The work that I did at Mars was in scientific and regulatory affairs – assuring that the company’s policies and procedures were in compliance with government laws and regulations in every market and scanning the scientific horizon for emerging technologies to enhance safety and quality of products.  It required a broad knowledge of science, really good communications skills, and a strong ethical framework.

My advice to those aspiring to leadership positions in the food industry would be to build and maintain a network of professional contacts who you can call on for advice in all three of these domains: science, communications and ethics. As the food system becomes more digitized, the tools available to food companies to assure safety and quality of their products will be much better than we have today.

But one concern I have about the trend toward online grocery purchasing is that advertising is being tailored to people’s purchase history.  People who buy vegetables and fruit receive ads for in-season products and people who buy highly processed food get ads for more of the same; the result could be a further acceleration of poor health among and contribute to the nutrition-related chronic disease epidemic we are experiencing in the US.

Dr. Catherine Woteki is President of the Charles Valentine Riley Memorial Foundation and holds positions as Professor of Food Science and Human Nutrition at Iowa State University and Visiting Distinguished Institute Professor in the Biocomplexity Institute of the University of Virginia.

She served as Chief Scientist and Under Secretary for USDA’s Research, Education, and Economics (REE) mission area from 2010 to 2016. In that role, she developed the Office of the Chief Scientist, established the USDA Science Council, instituted the Department’s first scientific integrity and open data policies, and was a founding member of the Meeting of
Agricultural Chief Scientists held under the auspices of the G-20. Dr. Woteki is an advocate for building the platforms needed to enhance domestic and international food and agricultural research.

Prior to joining USDA, Dr. Woteki served as Global Director of Scientific and Regulatory Affairs for Mars, Incorporated, where she managed the company’s scientific policy on matters of health, nutrition, and food safety. From 2002 to 2005, she was Dean of Agriculture and also head of the Agricultural Experiment Station at Iowa State University.

Dr. Woteki served as the first Under Secretary for Food Safety at the U.S. Department of Agriculture (USDA) from 1997 to
2001, where she oversaw the safety of meat, poultry and egg products. Dr. Woteki served in the White House Office of Science and Technology Policy (OSTP) as Deputy Associate Director for Science from 1994 to1996. During that time, she co-authored the Clinton Administration’s policy statement, “Science in the National Interest”.

She is the author of more than 60 peer reviewed articles and 12 books and technical reports.

She received her M.S. and Ph.D. in Human Nutrition from Virginia Polytechnic Institute and State University (1974). Dr. Woteki received her B.S. in Biology and Chemistry from Mary Washington College (1969).